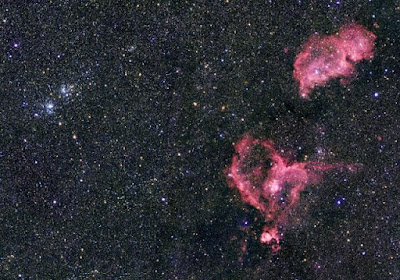 It was an easy walk to the Observatori Astronòmic de Castelltallat. Still warm and long before dark. The opening hours depend on the sunset and in May you are welcome at 21.30 but on weekdays by appointment only. I was lucky I’d bumped into a small group of enthusiastic amateur astronomers on the campsite and was invited to join them. They all went by car but I wanted to go on foot. Preferably under the stars, so originally I had planned to walk back but it promised to be a dark night and I wasn’t sure how easy it would be to find my way without a light through the woods and I don’t like using one when I’m walking in the dark.
There was some discussion before I left about whether it would make any sense to go there since it had gotten quite cloudy but everybody seemed to be wanting to give it a try. I left before seven, they waved me out.

You can sense it when nature is getting ready for the night. Birds get louder, the scent changes. I thought I felt raindrops now and then but it remained dry. Two deer crossed the path, standing still in the middle. I stood still as well and we stared at each other for a bit. The trees were mainly pines and gave off a strong smell after the hot day. While I walked the colours disappeared slowly and when I arrived at the observatory everything had turned from green into grey. There were no stars in sight. But the onservatory was lighted beautifully and it was still possible to see the outlines of the Pyrennees on the one side and the Montserrat mountains, my goal, on the other.

I was too early and I walked around the white semi-sphere. There was a small complex of old historical buildings, a big contrast with the observatory itself that looked like a spaceship. I was hoping for the sky to open up, most nights had been clear and filled with stars in the last two weeks but of course tonight everything was covered up.

The cars and the men - why are astronomers almost always men? - arrived and I joined them. They came from different parts of Spain and met up once a year to look at the sky together. In a way a very romantic thing to do (which of course I didn’t tell them). The tour was going to be in Spanish but I was mainly here to look at something I didn’t understand anyway, not in any language. We might have given things names and calculated distances and sizes but the universe and any part of it is still ungraspable for our human mind, even when we think we do know about it because we can photograph it and measure it.

There was an exhibition about the proportions of the solar system with a huge (not talking universal proportions) gleaming yellow ball in the center. I was surprised to find out that this permanent exhibition originated in the place where my journey had started, at Nau Coclea, the Art and Residency Center that had sent me on this walk. In 2006 the sun was standing in the basement studio where now swallows live and artists present work. Other planets were located in the area, Venus 126 meters away, Mars (only 8 mm. big) 245 meters, Uranus 3 kilometers, Jupiter (2 mm.) 6,5 kilometers from the sun, in a nearby village. You could move through the whole solar system by biking or walking through the countryside around Nau Coclea. I wondered why Clara, the director, hadn’t told me but I guess she was curious what I would find out on this walk myself, just following her route without too much knowledge about it, the same route we will walk in August and September with a number of people.

The men admired the big microscope on the roof but there wasn’t much to see looking through it. It was a pity but I suddenly remembered an e-mail I had received last week. It was from a friend who is a doctor, haiku poet and amateur astronomer, somebody I have never met but communicate with ever since he started supporting my walks. I had sent him a small paper boat and a photo of all the boats I had folded out of trash I had found on the road while walking from Barcelona to Paris in 2015. I had also included a story I wrote about “The one million star hotel”, a night I spent sleeping outside under a first cloudy but later on clear starry sky. He wrote me: “I like your story about the million-star-hotel ... And I understand your disappointment with the cloudy night ... If that should happen again, I attach a photo of the "Heart and Soul" nebulae (and the "Double-Cluster" in Cassiopeia like two eyes). They are SO beautiful. And there are LOTS of stars around. You can save the photo on your iPad and then point it towards the sky."

So that is what I did. It was beautiful. And when I showed it to the men they all recognised it and smiled.

I drove back with them to the campsite. It had started to rain softly. The headlights of the car scanned the road. The men were a bit disappointed but I wasn't.

Back in my tent I held my iPad up again, wandered around in the amazing photo until I got lost and fell in a deep sleep.