Day 7. The nature of culture 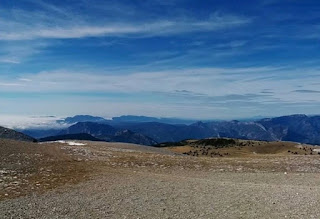 Such a contrast between the rough gravel and the soft roundness of the mountains. A long slow descent today but first wandering through a kind of moon surface landscape. I see more people than I’ve seen in the last week. Most of them speak Catalan. I exchange a few words in Spanish with a happy couple dressed in almost similar outfits. Matching jackets, trousers, similar shoes. They tell me they always come here in May, after the winter season and before the summer crowds arrive. I only understand later what those summer crowds are doing here.

I have to stop writing how beautiful the views are. I can’t help myself though, having been born in a country with no views like these and the only elevations in the landscape being under 100 meters high. I love forests and I still have a soft spot for endless corn fields but I can’t resist wide open views.

In the 19th and eary 20th century these roads were used by the “trementinaires” or “turpentines”, mainly women who came up with a creative but also indispensable idea to survive in these valleys that had seen so many people leave to find seasonal labour elsewhere. The trementinaires produced medicinal remedies from herbs and turpentine extracted from trees, to treat all sorts of ailments, from aches and pains to infections and insect bites. They travelled around Catalunya on foot to sell their products in villages and farmhouses at faraway corners. Some of them were on the road for months on end, usually repeating their journey once or twice a year, often following the same route and selling to the same clients.
The most requested product was turpentine, a red pine resin. Each trementinaire manufactured her own turpentine, and every turpentine had a  different texture, colour and fluidity. Turpentine patches were used against pain, to cure spider and snake bites, to heal ulcers, serious infections and simple colds.

Most of the women were illiterate and knowledge was transferred orally from mother to daughter or granddaughter. Everything we know about turpentines these days is what is left in the memories of their descendants. In the museum in Tuixent there is a Turpentine botanical garden and in summer they organise courses and create potions based on old recipies but I prefer walking though their working territory and finding useful plants and herbs here over museum input. (Not saying it isn’t wonderful that they are keeping this history alive and teaching people about wild edible and medicinal plants, on the contrary.) There isn’t much to find plantwise up here, even the pines are small, but plenty of forest and fields on lower levels.

The top of el Pedró dels Quatre Batlles is an odd spot. I catch a small group of kids accompanied by two adults taking photos of each other in the landscape. They enthusiastically read the signs with the images and names of all the mountains in the far distance and point and shout. We are at 2386 meters here. The map I was looking at on my iPad looks like a drawing. Lines in different colours show the skiing pistes. Here in nature the lines are being formed by the metal cables of the skiing lifs. There is nothing left of the Catalan flag that once waved proudly on this mountain top. No deeper meaning in (writing) that but I have to admit I don’t like flags. I admire the Catalan culture though and it is wonderful to learn more about it by climbing these mountains and getting a little bit closer to it wandering through this land and meeting people in woods, village cafés, on street corners and on mountain tops. I wish I spoke their language but I can just about manage in Spanish. Knowing a language always teaches you a lot about a culture. I am still wondering about and struggling with the two ways of saying “to be” in Spanish. A permanent way to be (ser) and a temporary state of being(estar).
I am quite happy on top of this mountain, even more when the small crowd moves on and I am alone here. A temporary state unfortunately. Estoy feliz.

El Porte del Comte is a bit of a shock although I should have known something like this would have been waiting around the corner in a major skiing area. It boasts an Adventure Park, golf courses, “tubbies” (sliding down a slope in a thing that is something inbetween a big tire and a round rubber boat, an activity for the whole family, haha) and a whole range of other things you can do when you are tired of nature. A massive hotel and a hostel. But also coffee with a view so I shouldn’t complain. I am happy though I wasn’t here in the weekend. There are quite some people around for a weekday but mostly walkers like me.

It is still another 7 kilometes to Sant Llorenç de Morunys and the more I descend, the bigger the trees get and the denser the vegetation. I look for wild edible greens and nibble on some flowers and leaves.The Ermita de Santa Magdalena is a small oasis. I try to go inside but the door is locked and there are no windows. The mystery of what is inside remains.

The campsite is the portal to the civilised world. Neat rows, bungalows. In the distance the village with what looks like a big lake but is actually a water reserve. I dreamt of swimming in the last days and the massive water surface looks tempting but my legs prefer to take me to the swimming pool. Small dreams are nice as well. And there is always tomorrow. Although there is also a new route to walk tomorrow. With less organised family fun & well planned adventure probably. For today I give in and eat a pizza. I am only human.

When I walk to my tent with a cheese and dough filled and very satisfied belly I can’t help thinking about wild asparagus and lambs quarter. The fake lake is still trying to seduce me with glimmers of light on its dark blue surface. In my tent I read a chapter from “Tourism and the power of otherness. Seductions of difference”, Camila del Marmóls “The politics of heritage and the past in the Catalan Pyrenees’ in which she mentions the turpentines. It reminds me to remember that when I am walking through what I sometimes think is the past is really the past seen through the presence.

"Many people who live in or are frequent visitors to the area quickly gain vast knowledge about older times. Comments on how old cooking methods gave food a better taste, on the happiness of festivals after long hours of work, and on the beauty of the landscape when it was cultivated rather than left as woods are not just official discourses promoted in institutional contexts such as museums. Rather, these opinions are frequently expressed in bars and at family meals, during the most daily routines and recalled by different sectors of the population. In the case of elderly people, the new relevance of the past is confronted with the memories of their experienced history, in which the territory was considered to be abandoned and fallen into neglect. In many cases, the appraisal of the past reaches high levels of consensus due to its ability to empower old inhabitants who can relate their experiences of these former ways of life. Jaumet, who was in his early 80s, told me about old songs that were sung in the village and that were forgotten for decades until new attempts were made to recover traditional music. Every time he is asked to sing them again, he remembers the time when no one was interested: “This country used to be so lonely…”, he expressed in a weary tone of voice. Official uses of the past within the politics of heritage and time became hegemonic not just as a consequence of institutional discourses but also because, beyond criticism, they can be thought of as ways to thwart the oblivion to which the territory had previously been condemned."
op May 24, 2017