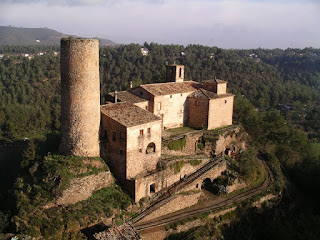 I got a lift back to the Observatori Astronòmic and entered the woods from there. A sand and gravel road, dusty, the rain from last night hadn’t left any traces. Walking through a small valley first and then along the hill, slowly going up. Now and then a farm and terraces, former woodlands now turned into arable land. The opener the landscape became, the more farms and houses popped up. Or maybe it was the other way around, maybe because the farms had established themselves there, the border between open land and forest had moved back. The village of Camps, a handful of houses a few hundred meters to the left of the road, didn’t seem worthwile making a detour for. The farmers were working hard, some of the fields had already been cut and big round haybails decorated the landscape. I like them and here they don’t cover them in plastic like they do in rainy countries: understandable but so ugly.
Some houses had a swimming pool. A swim would be nice now, but maybe I would be so lucky to find a river or a small stream at the end of the day.

Just around lunchtime the dusty slow road turned into a big and fast one. I passed El Molí de Boixeda, a former mill, now restaurant with a big vegetable garden in the back. It was too tempting not to stop and there were only one or two kilometers left to walk. And there were snails on the menu! A good excuse to slow myself down. I hadn’t expected so many people inside on a Tuesday afternoon in what at first seemed to be a lost corner. The road was a sign of many people passing by though. From where? Manresa? Where to? The geography of Catalunya is still a mystery to me.

The owner told me the mill was originally a saw mill and later on used for grain. He was mainly using local products in his kitchen and they baked their bread themselves. He brought me some cherries he had harvested in the weekend. My first cherries of the year.

The big road led to Canet de Fals, one of the least charming villages I’d walked through so far. A modern streetplan with a somewhat rigid grid, new houses with cars parked next to every one of them. Lots of swimming pools, little atmosphere. Apparently these houses were originally second homes of people who lived in the city, most of them build in the seventies. These days people live there permanently though.

I quickly walked out of it, back in the direction I’d come from to climb the hill with the towers, Les Torres de Fals. It was an odd sight. They are the only remainders of the castle that overlooked the village just over 1000 years ago. The old parish church of Sant Vicente and the rectory are still there, the two cylindrical defense towers are far apart, seperated by a small ravine and still give an impression of the size of the former castle by marking the space it once occupied. One was clearly older than the other. What happened here? There was nobody around to ask.

Huge black beetles moved from flower to flower. The swallows were back. The mountains seemed far away but only a week and a half ago I was 2 kilometers higher up than I was now, wearing socks as gloves and thinking of logs burning in the fire instead of dipping my feet in cold water.

I had promised myself a river. Let’s see if I could find one. The sky was clear. Maybe I could sleep under the stars.
op May 30, 2017