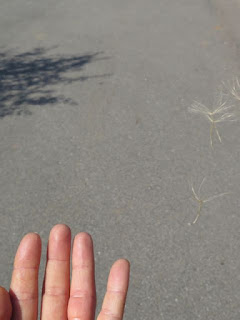 Somehow this turned into a day about flying. Maybe the seeds I sowed in the last 8 days wherever I went have been sprouting. Cosmos Daydream seeds. A resilient plant with a beautiful name that doesn’t need much care, thrives in difficult circumstances (heat and little water, soil with little nutriants) and flowers beautifully. Or maybe the length of the walk today, only 7 kilometers, made me stand still more often to see what it was I saw moving. Black and yellow swallowtail butterflies, finches, a medium sized bird with a yellow back which I’d never seen before but was too fast for me to identify properly, are there Orioles around here? The swift movements of swallows, a few birds of prey far away, a giant dragonfly with a metallic green glistening body and delicate yellowish wings. Big eyes. They see the world in ultra-multicolour: where we humans have tri-chromatic vision (we see colours as a combination of red, blue and green), dragonflies have a minimum of 11 (and up to 30) light sensitive proteins in their eyes. They can see ultraviolet for example. Until today I never wondered what I looked like in a dragonfly’s eyes.

My thoughts went flying as well, back and forth, back to Núria and Gósol and the mountains Picasso crossed with a mule and the ravines that matched Caracremada’s desired burial place, back and forth inbetween then and now, not going foreward, or whatever direction it is to where the future lies in waiting. Nine days, a small eternity …. does that exist? I guess it does. Because I just walked it.

Today I walked from Lladurs to Solsona. And in case you are wondering what happened yesterday: the report isn’t written yet but present in notes and in my memory: somehow I always underestimate how much has to be done (and seen and listened to and waited for and not to be forgotten: walked) in a day and sometimes when I am ready to start writing my story, there is nothing of the day left. It will come. I am trying to stay in the day as much as possible so yesterday has disappeared already and will pop up in words here at some moment.

I lingered in Lladures for a bit in the morning. I enjoyed the energy of the place and it had been wonderful to camp in nature and not in an official place. The pleasure of opening your tent in the morning and not having to think about time has been a rare one: the walks so far have been long and not the easiest ones. Some people would pack and start asap anyway, to have the walking part over with, but I don’t really see a difference between walking and waiting, dreaming and seeing, moving and standing still. Walking can be many things and many things can be walking.

Furthermore Solsona was in the well-connected world again and Lladurs, even though these days easily reachable by car, was connected a bit more to the quiet world it had existed in for centuries.

It was hot already when I finally started walking. But my way was downhill, through farmland and woods, nothing to worry about. And I had fresh water from the fountain in front of Lladurs’ church.
I passed the ruins of the castle about which I had heard a most wonderful story. I am not sure if I got all the details right because it was told to me in Catalan but even if it isn’t historically correct (with or without my possible misinterpretation) it is a great story. Apparently during the Carlist War in the 19th century, some soldiers went up to the castle to kill the commander and he escaped by jumping off the cliff with a big sheperd’s umbrella. That must have been quite a spectacle.

The path followed the road closely but there was hardly any traffic. The birds produced the loudest sounds, taking turns with the wind that got quite strong around midday.

The historic walls of Sonsola came as a surprise. Although small, it is a proper city with city rights and many historic remains of its rich past. I walked around and drank water from an old fountain at the Placa Sant Joan. I hesitated in front of the cathedral, but I didn’t enter. I felt too small for a building so big with next to it its equally impressive brother, the Bishop’s Palace, one the most important examples of Catalan neo-classical design. It is a museum these days and I did enter there, but mainly because I was curious about the salt sculptures: a priest who lived in Cardona in the 19th century devoted himself to making scale models of castles and other buildings, carving busts and statues and reproductions of objects out of rock salt. When he died, the collection (including works from other artists) was auctioned and brought to Solsona. Salt has been on my agenda as a material to work with somehow (or maybe I do already, sometimes photographing the salt stains in my black shirts after long walks) for a while.

I didn’t last long. I’ll come back one day to pay it a proper visit. Sonsola’s historical buildings deserve the right attention. But mine right now needed to be unfocused. Floating around on some old Plaça in the shadow, looking at people passing by, maybe doing some writing.