Day 2. Of course there is snow. 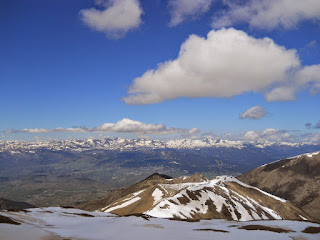 It is cold at the campsite in Err. Err. It sounds as if the village is hesitant to exist.
The record label I helped founding years ago and still do the photography for is called ERR. Evil Rabbit Records. Every word represents many worlds. Earlier today I read "When you lose a language, you lose the world view that it encapsulates.” It was an article about the Gaelic language. But it goes for any language. Any part of a language. A single word even.

The language I am surrounded by here, on my walk, has had some hard times. It was banned in the early 18th century, saw a literary revival in the 19th century, received an official status during the Second Spanish republic (1931-37) but was banned in schools and in the public administration during Franco's dictatorship (1939-75). Since the transition to democracy, Catalan has been recognised as an official language and these days there is no parallel in Europe for such a large bilingual community.

I still don’t hear the difference between Spanish and Catalan when I don’t listen really carefully. I often just focus on trying to understand what is being said and my old knowledge of French (which is closely related to Catalan) and new knowledge of Spanish is mixed up in my head, the words I hear just land on this texture of language knowledge and my brain is more keen on making sense of it than working out what language it is. Maybe that’s odd and when I say this to Catalan friends they seem to be a bit offended, as if I’m saying there is no real difference between the two languages but I guess it touches upon an old pain and doesn’t have anything to do with me. If there is anything I value it is language and the differences and similarities between languages.

I walked through the snow today. I could have known but when I started out on this walk, when I packed my things in Barcelona, I hadn’t thought about it for a minute. Of course there is snow. I am in the Pyrenees and the highest point today, the Coll de Finestrelles, is 2.744 meter.
Before I left Núria I had a last look at the Playpark. It was completely deserted. Yesterday I was a bit annoyed by it but today I thought it is actually quite nice that a place where people used to go to ask the Holy Virgin to give them children now is flooded with children in summer time. You always have to be careful what you ask for.

It was a beautiful walk, not easy, but not too strenuous. I’m not sure I have the proper words to describe the amazing views. The clouds veiled some of it from time to time but their movements presented a spectacle in itself, as if they were performing for me. Big birds of prey, stones that had been tread on by uncountable people, the feeling of being part of eternity and of being nothing more than a coincidence in time. Most of the trail was quite barren, rocks in every shade of grey, some pine trees and sturdy grass and complete silence most of the time. I saw a walker in the distance now and then but most of the route I was alone in the landscape.

I met Antonia and Juan at the highest point. They were walking the same road. Their big smiles made me realise I had been smiling as well walking through the landscape. Smiles like thresholds between the outside world and our own inner selves. She took off her sunglasses so we could look each other in the eye and she wished me a safe journey.

I hadn’t realised I had crossed the border, somehow I thought I would stay on the Spanish side. I never pay too much attention to borders. Made up lines to devide, only existing as a line on a map or as a natural feature like a river in the best case, manmade out of stone and fear in the worst. And I also found out too late that the warm sulphurous baths of Llo were on my route. If I would have known, I wouldn’t have lingered so much. My limbs hated me when I continued and I promised myself I would come back some other day. But I remembered all the other times I told myself I would come back to a place I loved or didn’t have the chance to visit ……

Err in the rain. I was too late to visit the Museum. I had read about its garden where old and local vegetable varieties were being kept alive and where workshops are being held to inform people and teach them about medicinal use of plants, but when I walked by and stopped to read the info on the door a man opened it from the inside and invited me in. He showed me the last Catalan gourds and told me about Salvador Sampietro, the last manufacturer who died in the 1990’s, with him a centuries-old tradition.

I thought about him when I walked the last bit to the campsite. These things always make me sad but maybe it is a false sentiment. We can’t keep all traditions alive. Just like we can’t stay alive ourselves forever.