Day 4. Because it is possible 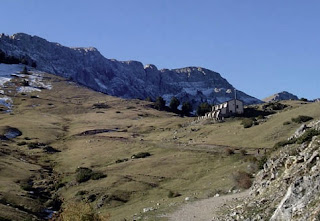 Last minute change of plans today. I heard Masanobu Fukuoka’s wise words in my head: “The best planning is no planning” and although I usually stick to that in my walks, this walk is a different story. The route I am walking has been prepared thoroughly by Clara Gari, the director of Nau Côclea, a Catalunyan art organisation and artist residency. It is a pleasure to walk in a different way for a change, to follow a route that is set out by somebody with a lot of care and with storylines branching off everywhere along the road. I still stick to Fukuoka’s advise by not looking ahead too much and trying to be in the day as much as possible. Planning takes time and things are always different than expected, often asking for replanning which then takes up more time. No planning at all asks for improvisation and also means things go wrong and take up extra time but at least you don’t have the planning and replanning stress and things going wrong can lead to beautiful surprises. But of course in this walk I didn’t have to put any energy into planning my route and unlike other solo-walks I don’t spend the nights in a sleeping bag under a tree or in an abandoned house. This walk feels somehow as a gift and I hope I am a good receiver of the gift by passing on the stories of it to you, reading this.

Today was supposed to be a tough day, 27 kilometers, 1000 meter ascent, 800 meter descent. Not something I would be too worried about myself but there are other people to take into consideration. This walk will be repeated in August and anybody can come along for a couple of days or just one or even the full 18 days. In a way I am already walking with these ghost walkers. Or maybe I should call them differently. The ghost walkers are the ones who walked this route before. Picasso will be one of my ghost walkers these days.

Clara wrote me to suggest two alternative routes. One would go around the mountain range, the other one would cross it. I checked my online maps, I looked at the huge mountains in the far distance, covered with snow. I checked the two refugios on the two different trails. I figured it would be wiser to walk around the mountains and not make things too complicated for myself. A much longer walk but easier. I tried to imagine the views from up there. Maybe I shouldn’t have done that. But it was too late already. I heard somebody say “Let’s go up there!” It sounded like my father’s voice. Of course. Some ghosts always walk with you, because you walk in their footsteps wherever you go. Or maybe I am deceiving myself. His cells are in mine so it could just as well be my own gut feeling speaking.

No time to waste. I checked to weather forecast to see if it would at least be doable and it said sunny with a small chance of rain for tomorrow. Today wouldn’t be a problem anyway. The Refugio Prat d’Aguiló is situated at the foot of the mountains.

I had a last look at the Bellver village square, where I had seated myself on an edge just under the arches next to the church. It was quiet, Sunday morning silence. It wouldn’t be too far to the Refugi, just over 16 km which was good because making up my mind where to go had taken some time. 16 kilometers and another one going up, elevation almost exactly 1000 meters.

The first part, through fields, brought me to a tiny village with the beautiful name of Pi. My delay in Bellver was a fortunate one. El Nou Cal had just opened. A sign on the bar inside said “Lo único impossible es aquello que no intents”, “The only impossible thing is the thing you don’t try” (I hope I translate it correctly). Café con leche in the sun. “Cafe amb lett” I should say here.
Yes, it would be possible to cross those mountains.

Another small village and after that no sign of people apart from a single building in a clearing in the forest that only opened up from time to time to reveal meadows with spring flowers. I had heard there where wild boar around here but you rarely see them at daytime. I hadn’t seen too many animals apart from the tiny ones anyway. Today the most impressive ones were ants carrying red petals three times the size of their bodies across the road to put on their nest as if they wanted to embellish it. I tried to not look at the mountains too much because I had a faint feeling of fear but there was no way I couldn’t. The seductive power of mountains.

The Refugi Prat d’Aquilo was situated in a small paradise. They served cold beer. I toasted to the mountain. I was tempted to ask some tough guys who seemed to have come from the other side how hard it would be to cross but maybe it was better not to know. There was no way back anyway.

Later on the man running the place told me about some mountain bikers who had crossed the mountain in early spring one year, carrying their bikes most of the climb and descent. "Why would you do that?" I thought straight away. But I had seen the answer already earlier today. Because it is possible. 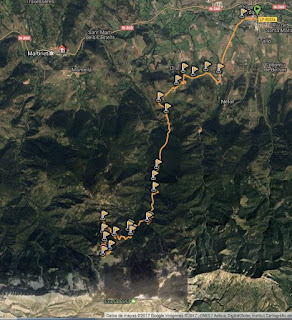