"Gósol was a marvel. There on the heights, in the midst of an air of incredible purity, above the clouds, surrounded by friendly people, hospitable, unselfish, most of them smugglers, we found what may be happiness.“

(The Private Journal of Fernande Olivier) 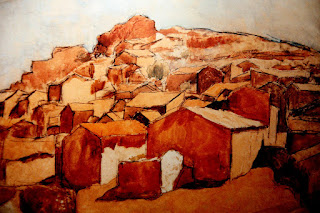 The road to happiness isn’t an easy one. It is cold and steep and slippery. Fernande Olivier, Pablo Picasso’s lover and muse, almost fell from the mule that was carrying her when it slipped next to one of the big cliffs. Picasso and Fernande travelled to Gósol around the same time of year I am walking there but 111 years before me. Picasso was in the early stage of his career, he was 24 but already becoming succesful, the two of them had left Paris to this then unknown corner of the world, now visited by tourists partially because they were there but also because it is great walking territory. The village hasn’t changed much though, although now it is easy accesible from the other side of the mountain I came from - the first cars arrived in Gósol in the early 40’s. And those mountains have changed even less. “The little Catalan Rockies” I heard them being called in the Refugi I left this morning but I prefer “la Serra de Cadí”.

The fear I had felt yesterday, which wasn’t the fear Fernande must have felt when the mule almost threw her off and the dark space far down the cliffs was lurking, but the fear of not being able to pass the mountains, the fear of defeat (although there is no shame in being defeated by a snow covered mountain) disappeared the moment I started walking up. When you are climbing a mountain there is nothing but the mountain. Exhaustion and focus on putting your feet in the right place take away all space for worries of whatever nature. I wonder if that is one of the reasons polar explorers and mountaineers do what they do. I like it off and on but it isn’t really my kind of thing while walking. I don’t need to reach the top, the farthest point, make the longest journey, although I would be lying if I would say I don’t get pleasure out of it when I do.

It was sunny in the beginning and the snowy parts weren’t too tricky. They reflected the sunlight magnificently and I could see the footsteps of people who had been here yesterday or the days before. The blue sky slowly turned greyer but nothing compared to the deep shades of grey of the rocks. Drops of rain, but not enough to consider putting on my rain coat. It was cold up here, maybe 8 or 9 degrees but the wind I had heard in the night had calmed down and I had to tell myself not to stand still too often because of the beautiful views. It is hard to take them in when you are moving, even when you are in walking speed.

The Comabona, over 2.500 meters hiigh, was on my left. The Vulturó, the highest peak with 2.648 meters further away on the right. The Pas del Gosolans was used in the past by seasonal labourers and intensively by smugglers. The Parc Natural del Cadi Moixero is where the first wolf has been seen in Catalunya since the last native wolf was killed in 1929. This animal was not a member of the Iberian subspecies though, but an Italian wolf (Canis lupus italicus) migrating from France. Since the first sighting in 2001 there have been more wolf encounters but mainly in denser forest areas.

I saw Gósol long before I set foot in it. The ocher colours Picasso started using while being in the middle of this scenery weren’t as vivid as they are in his paintings but I’m sure that on a sunny day it is a perfect match. Here Picasso left his melancholic and sentimental Blue and Rose period paintings behind and apart from the colours of the earth and houses, it is said that the12th-Century wooden Madonna, with a strong, expressive white face with big, painted eyes, which he saw in the village church, altered his approach to painting. And there was also his friendship with the old innkeeper, Josep Fondevila, a former smuggler (of course) whom Picasso greatly admired. His  ascetic appearance was an inspiration source so contradictory to his other beloved main human model of that time and it remained a touchstone until his death. 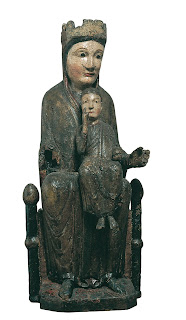 Picasso stayed in the village center: the Hostal Cal Tampanada, in those times the only accomodation for strangers, still exists. These days there are hotels and a campsite, an ugly bungalow park and there is the Molí de Gósol Hostel where I would be staying tonight, the ancient mill,15 minutes outside the village. It was still cloudy and was tired and eager to take off my shoes but first I wanted to visit the Picasso Center. There are no paintings of him in Gósol but there is a lithography collection and the “Carnet Català”, his Gósol notebook. I had a look at the exhibition about life in those days and smiled when I saw lantarns that were used to scare off the wolves. Maybe they will need them again in the future.

I was hoping to see the wooden Virgin and look into her big, painted eyes but she was no longer there, in fact she was in the city where I had set off to start this journey, in the Museu Nacional d’Art de Catalunya in Barcelona.

Outside I wandered around for a bit, looking for people who resembled the old Vondevila. It wasn’t difficult to seperate the locals from the foreigners. The colour of their skin had a hint of ocher. 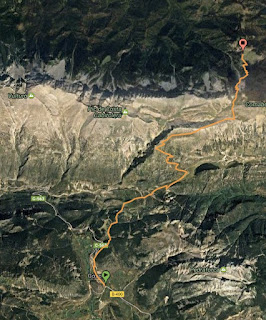 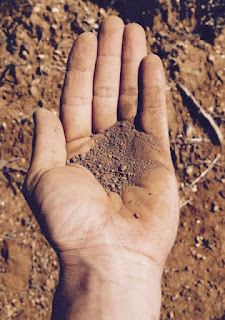