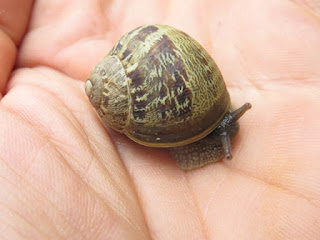 You have a responsibility when you walk through somebodies life. If there is anything the walking taught me, it is exactly that. You can’t just barge in, wander around, take pleasure in what you see and then leave without saying a word.

I headed off today to walk through a big valley dotted with small villages, to see the sun slowly warming up the earth again after all the rain that fell last night. Moisture turning into clouds, rising up from the soil. Colours becoming visible again. Blue and red and orange and green. Grey and black and purple. The tiniest of creatures and the biggest of mountains. And in-between all of this I just put one foot in front of the other. Carrying the loneliness that is the main baggage on a solo walk always. Heavy sometimes, but usually light and at night something that keeps me warm, especially when I am the only human creature in a big forest after a day without having met a human soul. You have to try to be comfortable with every part of you and maybe our never-ending solitude is the biggest part of us. The part we are most afraid of. The part where we are not. Where we are nothing. Where the world doesn’t exist. It is the thing that resembles death more closer than anything else I can think of. It is the negative of our presence, it is the absence inside us, it is our truest mirror. We always carry it around and somehow I always felt comfortable with it, especially in nature where you can’t get away from it even if you would want to. Where it becomes such a natural thing that you start to love it.

I crossed the border again, I changed “Bonjour” for “Bon dia”, I saw Puigcerda in the distance, I heard roads and the weekend soundtrack: a kind of humming that is a combination of gardening tools, cars moving slowly through the countryside, farmers working because animals and vegetables don’t do days off and now and then a cheerful human voice. The walking was easy. No snow, no big climbs, no freezing fingers (I can’t believe I removed my gloves when I changed the content of my bag last Monday, making a quick stop-over in Barcelona in-between Scotland and the Pyrenees: fortunately socks can be gloves as well), no heat.

I bought some food in a shop, sat down at a café to drink a coffee but I ordered a small beer instead and seated myself on the side of the building at some distance from the only other table that was occupied. But the man at the table started talking to me straight away. He asked me if I was on holiday here or just walking through. I told him I was walking and working. I tried to disappear in my own world, keen on being with myself but I had entered his by walking through his village and seating myself at his local café. He asked me what sort of work I did and I told him I was an artist. He told me he was a painter and from there he put all the weight of his life on my table. I always find it astonishing how people are capable of telling you their whole life in the time it takes to drink a beer. A small one even. The death of his mother, the hardship of trying to make a living as an artist and craftsman, a two year old son who doesn’t want to live with him but is with his mother in the city, holidays in other countries, a long time ago when he was still happy, and again and again how hard it is to live. His despair of living in a capitalist world, his fear of the future, how life was just passing by.

He lived like he snail, he said and I only understood it properly when I saw him driving around in an old camper van later that afternoon. I told him I like looking at the swallows. He told me he had six dogs but he’d rather be a bird. I said I preferred the speed of a snail and do the flying in my head. He said there was no happiness in his life and I told him big happiness is an illusion, happiness is in a small beer in the sun. In a single moment. And he smiled and walked inside and came back with two beers and joined me at my table. We toasted.

My Spanish is bad but you can say a lot with little words and understand almost everything when you allow yourself to listen and look carefully. He wanted to get me another beer but I told him I had things to do.

So I left. And walked. And thought about all those lonely people I’ve been meeting on the road in the last years, usually stuck in a place because their loneliness is too heavy to carry around. Waiting for somebody to pass by who can take some of it. But it doesn’t work like that. 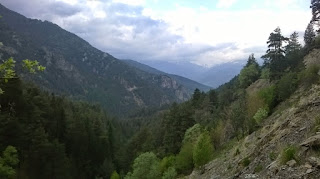