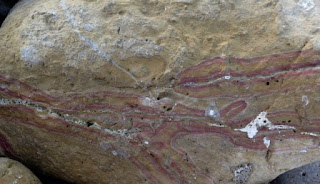 Layers of time, manifested in the rocks and soil and remembered in the stories of the people who walked on these roads. When Picasso arrived here, the anti-Franco guerilla Caracremara wasn’t born yet and in the year Ramón Vila Capdevila (which was his real name) was killed, Picasso was at the top of his fame and the Picasso Museum in Barcelona opened that year.

I am not sure if I am walking in Caracremara’s footsteps today. The route is part of a bigger circular route that moves through the territory where he lived, survived, operated. He must have remained out of view during daytime most of the time, staying away from roads like this one. Little is known about how he survided, what his exact movements were in the years before he died. It must have been an extremely tough life, only possible because of a strong commitment to his goal, undermining and bringing down the Franco regime. There is a list of the items he carried with him when he was killed, shot in the heart by the Guarda Civil who made him suffer extra by letting him slowly bleed to death. Weapons and tools, handy things like string, plastic cloth and matches, some sanitary items, a pan and pencils, a watch, a sleeping bag, peas, rice, sugar and salt, old trousers, two pairs of white and pink socks, money and a small photo of himself. He carried everything he owned with him.
He was nicknamed Caracremada, burnt-face, because of the scars a near struck of lightning, that killed his mother, left on his face when he was a child. Personally I like his other nickname more, “Passosllargs”, big steps.

I left Gósol and reached the Ermita de Santa Margarida, where Picasso frequently went, after a couple of kilometers. A small group of people on horseback passed me when I was trying to figure out how old the chapel could be. It looked well maintained, possibly restored.
The valley stretched itself out in front of me, walking through it I saw hawthorn, gorse, thyme and lots of yellow flowers I don’t know the name of. I was heading towards the Cap del Verd, the highest point for today, a 1000 meter climb over 9 kilometer. It was still cloudy but getting warmer again. There was some thunder yesterday but not too close to get scared after reading about how Caracremara got his nickname.

Did he enjoy these landscapes or were they just a refuge, a hiding place, an area so familiar and at the same time so full of danger that he didn’t see the beauty of it? Maybe it is a stupid thing to wonder about. He had a completely different reason to be in these mountains and he spent years and years of his life here, fighting. But the hawthorn and grasses I saw are the same plants he wrote about in the only known poem from his hand, titled “To be buried in the mountains’ which he wrote when he was recovering from his injuries somewhere in hiding and in which he describesd his aversion of the modern world and the hypocrisy of many people. “ I want to be buried/Far from those fake places/Where people come all year/To shed their tears ….. I want my grave to be/Covered in the thorns/Of big and prickly blackberries/Hawthorns and wild thistles … All around/Grass for lifestock will sprout/And in my shadow/A tired black dog will sleep.

I thought about the black dog while I was walking. Throughout European mythology, dogs have been associated with death, in some way guardians of the underworld. At night I sometimes hear it.

When I saw deer in the far distance I forgot about the black dog. This is my walk as well, my steps, my hours, shadows are shifting, the mountain top, a mountain top, is getting closer. I wonder if I will ever get used to these views, they keep amazing me every time i stand still. Coll dels Belitres, Coll de Veis, Coll de Port.

The Refugi coll de Port, surrounded by big pine trees is closed. Tarmac roads are back. This is skiing area. I walk the road that leads toTuixent-la Vansa, a skiing piste. We humans sure know how to mess up a beautiful landscape. It is still quite harmless here compared to other places but I consider every road that hasn’t been made by animal or human feet a scar in the landscape.

When the night falls over the Refugi de l’Arp the black dog comes back again and licks my hand. I go for a small nighttime stroll, taking refuge in the night, far away from “el bullicio humano” as Caracremada calls it. My steps are small. 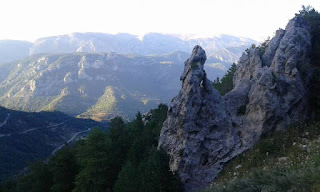 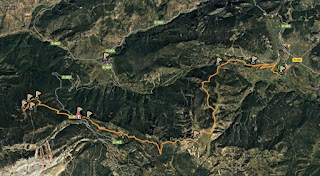