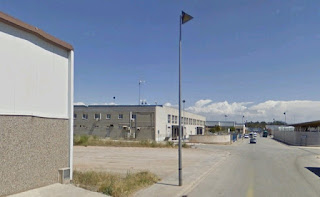 A different story today. Yesterday I was already wondering about our human interference, how we manipulate nature, how things slowly started to change after we settled down and became farmers. Until that "happened" we lived in nature, through nature, but we started to create borders between our own habitat and the places where trees and plants and animals did things the way they had been doing it for milennia. Of course you could say we are nature as well and natural forces also take back what humans claimed, creating new natural borders, but I think we all (well, many of us at least) agree on the fact that homo sapiens is the only species that is ruïning its own habitat and thereby doing the same to all the other species.

It wasn’t on my mind when I woke up though, surrounded by trees and plants and the soft buzzing of insects, the sky a light blue. I hadn’t found the river or stream I had promised myself yesterday and my small research into finding a communal swimming pool in the nearby village wasn’t succesful either: I had drank a beer on a terrace and chatted with two locals who seemed to be very happy to live there. I secretly hoped my question whether there was a swimming pool nearby would lead to an invitation to take a dive in one of the private pools I had spotted earlier on. It hadn’t. But the really hot summer days hadn’t started yet so the cold beer cooled me down sufficiently and I made my way back into nature when the sun set.
No tent. Trees for shelter. A sleeping bag to stay warm. Life can be simple. A long walking day through villages on the northern outskirts of Manresa was ahead so I went to sleep early and woke up when it was still cool.

The first part, walking from the two lonely towers, Les Torres de Fals, to Sant Joan de Vilatorrada along the GR3, dipped in and out of the woods covering a small mountain range. Even walking in the middle of nature I heard cars in the far distance, the buzz of a highway which strangely enough always sounds like the sea. It is quite interesting how you perceive sounds. Knowledge always directs our imagination and from there our emotions. If I would think there was an ocean out there, I wouldn’t mind the sound. Now I did, walking in nature but in a sea of cars at the same time. The C-25. I laughed when I thought about the pronounciation of “C”.

Views to both sides, into my past and into my future. The Pyrenees to my left and the Montserrat mountains to my right. Trying to not be in three places at the same time. Thinking that that would be impossible anyway. Or wouldn't it? What is place and what is time? Trying to get rid of those questions and just walk and smell and see.

From the last mountain top, the Collbaix, I could see the highway and the cars like tiny fish. The small plateau I was standing on looked manmade. I wondered if there once was a building here. Another castle maybe, overlooking the valley.
I ate my lunch sitting on some big slabs of stone, looking east, to where I was heading. The grey squares of concrete buildings, big roads sliding like snakes through the valley and forming circles where they met, fields in irregular shapes, the city of Manresa dominating the view.

Manresa. I like that name. I tend to think places look like they sound but I also know that doesn’t make sense. Still I have been disappointed often, visiting a town with the most amazing name, sounding like ancient history, forgotten dreams, birds with big wings floating through the air, laughter, and then finding myself in some ugly place with rude people.
From a distance it was hard to know if Manresa looked the way it sounded. But I didn’t have my hopes set high, knowing this is an industrial area. Textiles and fabrics. But with its heydays over which increased the chances of visual pleasure. Industrial heritage can have a beauty of its own. But so does any kind of ugliness. And I am not a nature walker anyway, not a walker for pleasure.

First Sant Joan de Vilatorrada. Downhill. The last bit of forest and then farmers’ fields. The first big building, low concrete halls. Storage space.
It was a bit of a shock to see the church but I guess I’ve been spoiled, walking through so many beautiful villages.

At the end of the fourteenth century the people in this village were mainly farmers, producing cereals, wine and olives. The textile production that became so important later in history was already present in products like hemp and flax. Things changed profoundly during the Industrial Revolution. An increasing population, increasing exploitation of the resources, mechanisation of production processes leading to more production of barley and decreasing cultivation of vineyards and olive orchards. A lot of immigrants arrived, big textile factories were build, a process that continued until the economical crisis in the 70’s put an end to progress. The former textile factory Cal Gallifa is a library now, organizing “activities to encourage reading, exhibitions, book presentations, conferences, literary gatherings (Reading Club), workshops, storytelling for children and adults”. I would call that progress.

No terrace or bar which was a pity. My coffee addiction is very useful during my walks since one of the essential things is to get into unplanned conversations with random people to hear strange and somehow informative stories that often tell me more about the history or current state of affairs than “official sources” would do. Bars and restaurants are perfect for that. There was a bakery though, the Forn de Cabrianes selling beautiful bread in many different shapes and with promising names. Small conversations with shopkeepers can be nice as well but they never have a lot of time and my Spanish asks for some patience so I just bought bread and tried to say how much I liked the smell of it but I’m not sure if she smiled at me because she liked what I said or if she had no clue and was just being polite.

The village was indeed not very attractive (and now I’m being polite). I walked out, walked through farmers’ fields and alotment gardens. The C25 was right by my side, sometimes left, sometimes right. I crossed it twice.
A big detour to cross another big road, I passed Sant Iscle de Bages and landed in a horrific but therefore quite amusing industrial zone just outside Sant Fruitos de Bages. More alotment gardens, the sadness of Sant Fruitos de Bages, another highway and finally some sense of nature again. Woods, El Pont de Cabrianes, a big river, a town called Navarcles, streets, apartment blocks, had I been here before?

I just kept walking, what else was there to do? Fields again, going up and down the hill, another hill and there it was. El Forn de la Calç. Centre d'Art Contemporani i Sostenibilitat (CACIS). 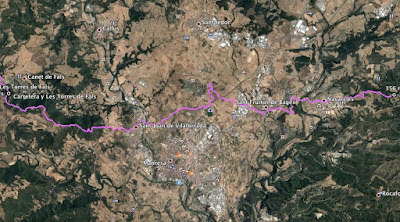