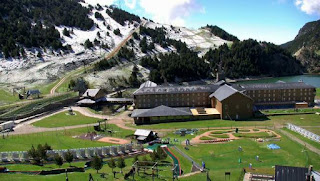 There are only two ways to get from Queralbs to Núria. My two favourite ways of travelling. There is the rack railway, the Tren Cremallera, covering a distance of 12.5 km over an incline of more than 1,000 metres and the only other way is on foot. It is an easy choice. Even if it wouldn’t have been my plan anyway.

May is a beautiful month to walk, especially in Spain. The air is soft and it is much colder than it was in Barcelona, in the city at sea level, but the temperature is perfect for a walk.
The train station is huge for a village so small. The stone building matches the other houses. When I walk through the streets memories from a residency in a small mountain village in Portugal return.  One corner is almost similar to this goat flooded Portuguese haven where I tried to be a farmer and an artist at the same time.

I see a few other walkers wandering around and even four mountain bikers. Maybe there is a third way to cross the mountains. They are posing in front of a small shop selling bread and cheeses. I almost feel sad about having brought enough food to get me to Núria.
I am in no hurry. And even if I would have been, the energy of this place would have dissolved it straight away. I walk through the portico of the roman church of Sant Jaume that was built here more than 1000 years ago. The columns house fantastic creatures, my favourite one depicts what seems to be a man swallowing the wings of two griffins.

The route is well sign-posted. There are flowers everywhere, ash trees and hazelnut trees and some cream coloured cows to make it even more idyllic. Forest at first, then open meadows and space opening up. The big mountains around the valley are still covered in snow. At some point I think I hear a big animal behind me but it is only a runner,  a speedy walker, more keen on being somewhere in as little time as possible than being as slow as daylight permits, which is sort of my speed. More time to enjoy the amazing views.

It is an old road I am walking and I am aware of all the other footsteps that have been left here through the centuries. Sometimes I even forget I walk through the modern world until I find myself on a paved bit again or bump into the railway track.

I meet a man on the road. He is a walker from Barcelona, my age. He has the light tread of an experienced walker. He doesn’t like circular walks, he prefers to walk from here to there, from one point in the landscape to another point, far away. He walks in summer and winter, he wouldn’t even know how to not walk. Restless feet. Eyes eager for new horizons. He tells me Núria is a river. Its best known waterfall is called “ponytail”, Cua de Cavall. I ask him how I can recognise it and he tells me I will when I see it.

I take off my shoes and stand in the small pool at the foot of the ponytail, close enough for the waterdrops to land on my face, far enough not to get too wet. I wouldn’t mind in summer but temperatures aren’t that high up here in spring. The altitude is close to 2.000 metres.

The road zigzags down, a building that tries to be as big as the mountains but has no chance pops up in-between some rocks when I least expect it. The circular lake has a beautiful blue-green colour.
The Sanctuary of the Virgin of Núria is massive. It was the venue chosen by the Republican Catalan Government to draft the "1932 Statute”, also known as "Núria Statute". It used to be a popular place of pilgrimage: San Gil, bishop of Nîmes, carved an image of the Virgin out of wood while living in a cave in the valley around 700. He enticed local shepherds to listen to the word of God by sharing the food he prepared in a copper pot, ringing a bell to alert them when meals were ready. Giles preached Christianity to the local populace for four years, until Romans threatened religious persecution. He fled, but not before hiding the pot, bell, cross, and the icon of the Virgin Mary.
It was found again in the 11th century by shepherds who then tried to carry it in procession to Queralbs, but failed "because it wanted to stay at Núria.”
The image of the Virgin of Núria suffered exile from 1936 to 1942 because of the Civil War and later remained kidnapped (1967-1972) by Catalan patriots. It is back now and I spent some time looking at her. The colours on the walnut wood are still vivid. Baby Jesus is in a somewhat awkward position leaning on her lap. She looks very solemn and somewhat sad.

I don’t know what to think of this place. It is gorgeous but the tourist energy defiles the pilgrim spirit.  The most beautiful places become the most sought after ones. Once couples who couldn’t get children came here to pray to the image of the Virgin of Núria. The shepherds regarded the Blessed Virgin as a patron saint of fertility. Now the Playpark is the most important activity in Vall de Núria. It is an area designed for children and families. It includes: mountain karts, circuit of scooters, sensory pool, balance games, elastic beds, slack line, rock climbing, tyroline, tubbings, conveyor belts

It makes me feel cold after the wonderful walk but it might be the low temperature as well. It will be close to 0 degrees tonight. But I’ll be in a warm bed.

Early start tomorrow, 17 kilometers to a place with the wonderful name “Err”. But no rest until I left some traces. I brought Cosmos seeds. The pink one is my favourite, “Cosmos Daydream”. 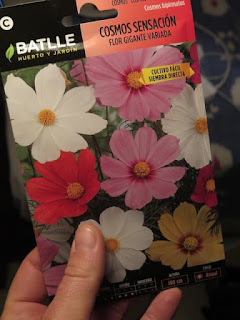