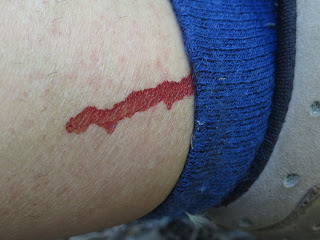 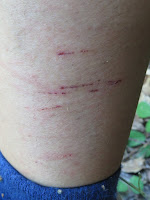 The trail is copied in the scratches and bruises on my arms and legs. Nothing too crazy, not too much blood being shed, no big injuries. Just getting stuck in a blackberry bush, slipping on loose stones during a descent, taking a short cut going down a slope in a dense forest, unavoidable to walk days on end without the landscape leaving some traces. After 7 days the multitude of minor wounds can be read like a map. 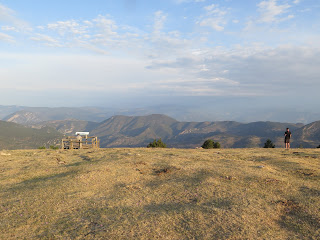 We are walking through an area with a long smuggling history. Picasso was intrigued by it when he stayed in Gosol. Writers wrote stories about it. From Spain to France and the other way around. From here to Andorra and vice versa. It isn´t something from the far past. It is of all times. I heard a story about somebody we met during our walk who used to go on skis to Andorra in winter to exchange goods. But some stories can´t be told in detail, or maybe they can but only long after they took place.

I carried chicken I smuggled out of the big pan that contained our main course yesterday. Not an illegal act really, there was loads of it left. Some bread as well. Maybe the man running the refugio we stayed at would have had a good purpose for it, maybe not. Anyway, I thought feeding a hungry walker on a long hot walk was a very good purpose.

What we learned yesterday and today is: if a man living in a remote place in nature tells you about a scenic alternative route that isn´t on the map but not too difficult to find, don´t take that route. It will be difficult to find and probably far more strenuous than the less beautiful but easily walkable and well marked route on the map.

We learned the hard way but we managed to find a way down through the spooky forest. I walked behind a smiling mickey mouse on a yellow rain cape - first rain on the walk - which made it even more sinister. 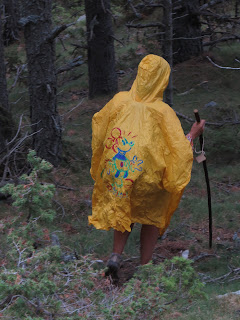 After that it wasn´t too complicated. Fourteen kilometers to Sant Llorenc along the GR. Bautiful landscape with mountains in our back and in front of us. The lushness of a valley with a river running through it.

I was tempted to take a bath twice. The first time I found a small pool in the river under some big rocks, flowers and butterflies everywhere, dragonflies in metallic blue. I walked on to find a waterfall and if my longing to be at the endpoint in time and have an easy late afternoon wouldn´t have been so present, I would have taken off my clothes to stand under it. But when not too long after I crossed a bridge I saw four of my fellow walkers floating naked in the water coming down with quite some power from a small natural dam formed by rocks in the river and two of them sunbathing on those rocks, their feet in the water, I didn´t hesitate.

We arrived at the hostel just outside Sant Llorenc tired. Seven days of walking without a resting day are taking their toll. Still our tired feet managed to get us to the medieval village center to see a performance by a group of 4 young poets in the inner courtyard of the convent. If I understood the introduction well, they had a mission to keep the older Catalan poets alive and to create new poetry (in new ways) as well. They partially improvised and it seemed to be inspired by our walk. I caught a word here and there, but mainly listened to the sounds while embroidering lines and shapes on my suit jacket. Somehow I believed I was capturing what they were saying, translating without really knowing what was being said but also without really knowing what I was embroidering.

The car brought us back, we drank a last beer and fell in a deep sleep. Tomorrow we have the morning off. Time for some loitering. For a swim in the municipal pool. For a slow coffee on the village square. For me it means time to work. The group´s leisure time is my writing time. But I love my work, otherwise I wouldn´t be here. 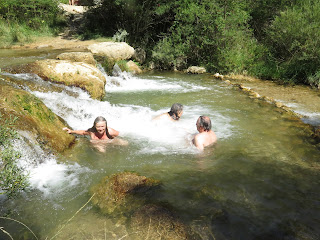