Day 2. The shadow of a black dog. Nuria-Err 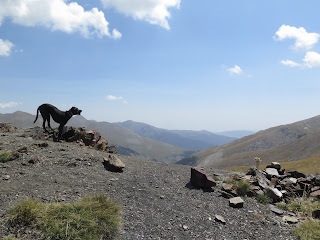 The mountains are gorgeous. I already mentioned them yesterday, determining our movements, our state of being. They wore us out on the first day already but at six in the morning the will to walk, the eagerness to move on, to see more, to get tired again, is back. The world is new and we are new.

We. I haven´t walked in a group for a long time, it is so different from walking on your own. Comforting and challenging at the same time. But so early in the morning I am alone with the mountains.

Breakfast, packing, gathering, starting. We are high up already but there is a long way up again. I can see where we have to go from here, a small pass inbetween mountain tops. Just put one feet in front of the other and you will get there at some point. And we do.

We reach the other side of the mountain and in the small valley the news reaches us that it might not be so easy as we thought to reach Err, our goal for today. We have to cross the border between Spain and France, which normally isn´t a problem but after yesterday´s terrorist attacks in Barcelona (and as I hear later in the day, in other places in Catalunya as well) the border controls are strict. Our transport car apparently had problems and most of the people in the group only carry an identity card which normally is sufficient but now people are being asked for their passports. We discuss, continue or go back and skip the part going through France? Some people suggest a vote. Should we stay together as a group? Should the people who don´t want to return the way we came from and take a train from our startingpoint to Puigcerda and continue from there go the way we planned to walk and join the rest later?

I can´t follow all of the discussion (in Catalan) but I express my wish to continue. I don´t know what to do if the group decides we have to stay together and return. I am part of the group but what does that mean?

Somehow during the discussion something shifts. Where first the risk of getting stuck halfway seemed to determine the decision, now people start to realise the authorities are limiting our freedom of movement and are spreading fear and we shouldn´t bough for that. The only way is forward. So on we go. And when we reach the next top we can see France.

There wouldn´t be any problem getting there, but we didn´t know that then. And I don´t think we even noticed when we passed the border. The trees looked the same, the cows made the same sounds. At some point the language changed but not much. Catalan isn´t confined to country borders.

But before we got there we passed the highest point. We could see two countries from there, one behind us, one in front of us. And it was there I saw a big black dog and I remembered something I had almost forgotten.

“ I want to be buried/Far from those fake places/Where people come all year/To shed their tears ….. I want my grave to be/Covered in the thorns/Of big and prickly blackberries/Hawthorns and wild thistles … All around/Grass for lifestock will sprout/And in my shadow/A tired black dog will sleep."

The black dog in the only poem known written by Caracremara, the last Spanish guerilla fighting Franco. More about him in one of the coming days.

Down into the valley, filling our water bottles at the source of the river Segre, going up again and even when Err seemed near it took forever to zig-zag down. We had dispersed, allowing differnt walking speeds for the group to fall apart in smaller groups. But at the campsite we reunited. To all sleep under the same sky as our fellow human beings elsewhere who are really restricted in their movements. 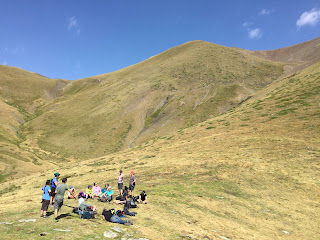