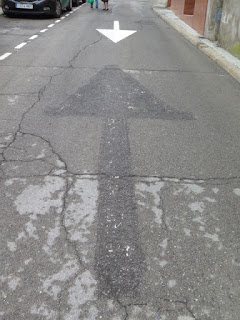 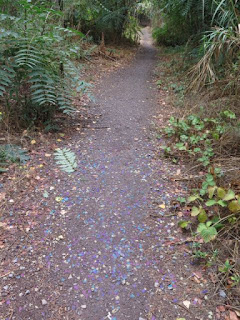 The rain started somewhere in the night and didn´t stop. The land could use it so we only complained a little while we dismantled and packed our wet tents. Like most mornings, especially while camping, it all took a bit longer than expected and miraculously just before we were ready to head off the last drops fell down. I lingered a bit, it was such a beautiful place and there had been so little time to wander around yesterday. All over the land around the lime ovens, installations made out of natural materials were slowly changing shape, falling apart, decomposing, growing into something else. I hadn´t had a chance to talk to the people running the art centre yet but now there was, or maybe there wasn´t because I was supposed to walk but I took it anyway.

It was 10.30 when I left, walking the last bit of yesterday´s walk in return. Nothing looked the same though. Colours were darker and dimmer, the sounds were different, the smell of the burned vegetation in the part of the forest that had recently burned down due to a forest fire smelled far more intense than it did yesterday. What was most shocking though was that the Montserrat mountains had disappeared completely. Not a single peak was visible. Our goal was nowhere to be seen.

The path followed the river Seu. Lush vegetation, bamboo bushes and big trees. Confetti on the trail in the middle of nowhere, who had been celebrating what here? A convent with closed doors, cameras checking if I wasn’t trying to get in. A big conference complex in front of it, with the photo of the founder on the wall of what once was a big factory, hence the name la Fábrica. I made a stop next to a young birch wih dead leaves. My hand almost fitted around its bark.

Walking up, out of the valley, I saw some glimpses of Montserrat again. The noise of the highway, that must have started somewhere barely audible and had quickly gotten louder, took over the sound of the water. I crossed a big road and civilisation was back. Allotment gardens, houses, a quite messy environment, dogs barking.
I entered Manresa at what I could only imagine to be the ugliest part of the city. Factories, warehouses, gigantic fastfood restaurants, big parking areas. No beauty without ugliness. And I bet loads of people loved hanging around here and didn’t spend one second wondering about the aesthetics of this place.

Into the center, across a metal bridge. Through a big door into a beautiful spacious hallway. Up the stairs, into the apartment. On the sofa. I had arrived. We had. Again. 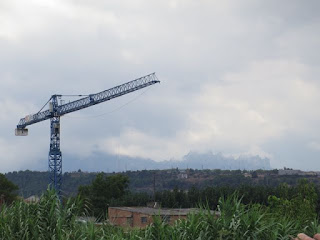 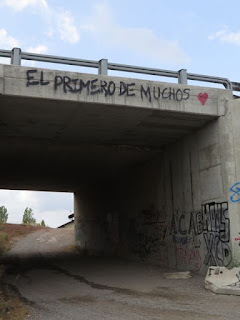