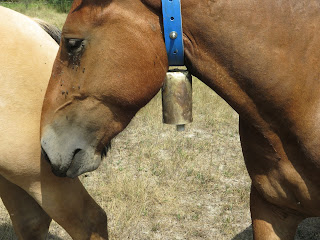 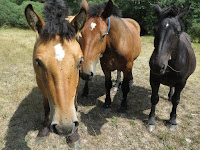 "Now, to be properly enjoyed, a walking tour should be gone upon alone. If you go in a company, or even in pairs, it is no longer a walking tour in anything but name; it is something else and more in the nature of a picnic. A walking tour should be gone upon alone, because freedom is of the essence; because you should be able to stop and go on, and follow this way or that, as the freak takes you; and because you must have your own pace, and neither trot alongside a champion walker, nor mince in time with a girl."

We didn´t manage leaving at 8. When you´re in a group, the person who is ready is the one who determines the moment you start.
I understand what Stevenson means but there are different ways of walking. I didn´t mind the delay, when you are on your own your pace is being influenced by a lot of things you didn´t decide on yourself as well. Unexpected extra time, the possibility to drink coffee and browse through the newspaper before finally leaving at 9.30. To somehow lose the group shortly after we started and ending up making a solo walking tour anyway. Not planned but pleasurable. In another way than walking in a group is.

No mountains today. But 28 kilometers to walk. I walk fast, I get distracted by a huge old empty farmhouse I could imagine living in and I miss the sign I should have followed. The group is far behind, I decide to continue the road I am walking on and catch them later when our routes will meet again. I walk the big road that leads to Puigcerda, the only safe pathway is through the cropless fields on the side. Cars rushing by, not the nicest view but it doesn't matter as long as I am walking.

Bourg Madam, in the Lidl I bump into four friends who I contacted earlier to say I will be in Puigcerda and who wrote me they don't know if they can enter the city with all the police controls. My mistaken road led me to them anyway. I take a picture of them in front of the olive oil. We say goodby three times. When I walk through Puigcerda I see what they meant. Long lines of cars, waiting to be checked or waved through.

I am not sure if the small roads are busy because it is a Saturday or because people are driving alternative routes to avoid the police controls. Or because they all come from the golf course where  the parking area is as crowded as the Barcelona beach on a sunny summer's day.

I find the Segre again, we drank from its source the day before, just after we wondered if we would be able to cross the border without problems. It was a tiny stream there, here it is a proper river. I walk along the river, loose my way again and end up in a field where three horses give me an unexpected performance. A black one, a dark brown one and a light brown one. All carrying a big bell in a different size. All moving their heads rhythmically up and down to graze and in sudden bursts of energy from left to right to get rid of the flies. Amazing sound.

When I follow them walking out of the field I find the path. The Segre on my right, the mountains far in the distance on the left. It is getting late, 25 kilometer, 26, 27. The campsite is there after 28,5. No trace of the others though. The others who read the info in Catalan I received last minute and not the extended online programme I had used as a guideline.

One quick phone call, one cold drink and a short drive by car later I found myself in a Bellver hotel lobby. Not a bad ending for a day with three wrong turns.
op August 19, 2017