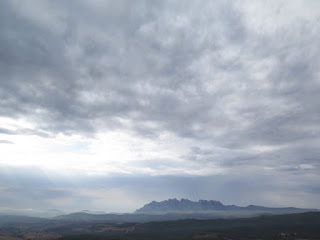 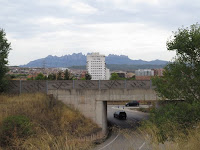 The sky looked like a thick grey blanket but in the far distance orange sunrays pierced through it. I had slept under a layer of plastic on an improvised bed of hay behind the two towers. The camp on the other side was still quiet, some people were waking up slowly. I decided to walk ahead and make the most of the day. Fig breakfast on the road, beautiful views of the mountains we had already walked through behind of me. Two huge black dogs running as fast as they could through a field into the forest. Montserrat was clearly visible today but looked so unreal with the dramatic clouds hovering above it.
The small mountain inbetween me and Manresa was a bit of a climb but nothing compared to the mountains we had encountered in our first days. I followed the red and white of the long distance walking trail and spend some time on the top looking at the shiny city at my feet.
A sign told me I was walking on a Camí de la Sal, via salinaria, an old salt road. It was a hot day, I was sweating. Salt.
I carried the last oak tree through the Carrer de les Alzines, the Oak Road into Sant Joan de Vilatorrada. The magic of coffee, the ugliest church I had seen so far, the beauty of old abandoned factory buildings, a gravel road leading through fields and fenced properties, fruit trees everywhere. Two thirsty men asked me if I knew where they could find water and I explained them where the nearest stream was.
The northern outskirts of Manresa. Big highways and of course the yellow M. I had spotted it on trash aside the road earlier already. Funny to see a MacDonalds again. I ate plums and grapes and apples and figs instead, still walking on the old salt road that led me past the Parc de l’Aguila. A big lake, I thought about swimming but it wasn’t allowed.
The industrial area of Sant Fruitós de Bages was defenitely the ugliest place I’d seen in a long time. It is interesting to walk through those areas though and enjoy all the crazy visual distraction. Nobody was walking. People drove their cars up to the doors of the megastores and plunged in to buy more things to stuff their houses with.
Navarcles. A lovely old bridge crossing the river, imprints of dog feet in the concrete, houses built on the edge of a natural stone wall. A lovely river walk, still under a grey sky.
After Navarcles the landscape was open again. Black trees and fields were the sad remains of a forest fire that had raged close to here not so long ago. The saddest sight. Montserrat was in my back now, the goal for today was a small detour but a worthwhile one. El Forns de la Calc, the lime stone ovens, now turned into the artist residency CACiS, with a focus on land art, ecology and performance.

When I stopped for a final break, the rest of the group passed me in cars. They hadn’t made it all the way. I followed in their tire tracks and found them 15 minutes later in complete silence on the mount covering and surrounding the two ovens. Everybody was staring down into the pit that functioned as a chimney in the old days. At the bottom a woman was lying in a huge nest made out of sheep wool. One of our group members entered the nest and spent what seemed to be a small eternity in her embrace. They were radiating happiness. 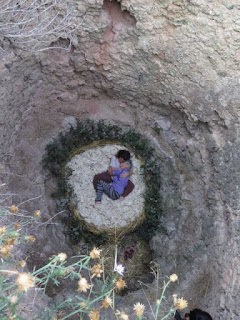 There was a beautiful energy in the air and I wandered around a little before pitching my tent. Remains of installations made out of natural materials were decomposing, changing shape and function. In the forest big red ladders made out of branches stood against tree trunks, other trees seemed to be growing through red wooden chairs, built in a similar way as the ladders were.
It was already turning dark.

We settled in and gathered around the long dinner table outside of the stone building. A feast meal had been prepared for us, there was wine, there were stories, lots of laughter and gleaming faces. We were tired and clean (showers!) and in good company. Life can be so easy from time to time.

For a moment I felt sad about having to leave tomorrow morning early already. It was a magic place and it asked for your time and attention. But what's the use of  worrying about being somewhere else in the future when you only exist now?
op August 30, 2017