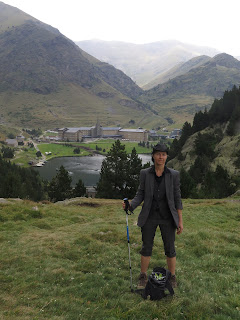 I see the world waking up. Mountains turning from black to blue to pink. Sun touching the ridges on the left, lighting up the grey and green, turning it a bright dark yellow. Cowbells, some animals are grazing so nearby I can hear the sound of their teeth pulling out the grass. A chamois on its way down.

Nuria. 2117 meters up in the sky. A silent, beautiful world. But when we arrived here yesterday people were glued to the tv inside the hostel. The attacks in Barcelona had just happened. The outer world enters quickly. Sirenes and people screaming and running. Our phones start ringing, there is no escape.

It is the first thing I think about when I wake up in my bed and walk outside. These extremes. This amazingly beautiful world in which the most terrifying things are happening. I am lucky to be here but I am there as well. I read the messages of friends who can't go back to their homes or were at the place of the attack just a few minutes before it happened.

But these mountains don't know anything about that. Or maybe they do, maybe they know more than I do.

We walked here from Queralbs, a group of about 14 people, carrying walking sticks and small backpacks and the 5 small trees I grew out of acorns from the forest where I grew up in in the Netherlands. Most of the people are from Catalunya, the first language is Catalan. I am handicapped but it doesn't matter. I mix English and Spanish and use hands and feet.

I wasn't sure if other walkers would be willing to carry my trees but it was quite the opposite, they seemed quite eager. I carried one myself and one we planted just outside Queralbs on an open spot in small forest close to a stream.

We weren't the only ones on the well-marked narrow trail. I must have been greated with a 'hola' or 'bon dia' about 300 times during the 8 steep kilometers up. The train followed roughly the same route, announcing its passing with the old-fashioned sound all trains made in the past.

We stopped for a bath in the river. I embroidered a winding blue line on my suit jacket. We walked on, slowly, eagerly, turning around from time to time to look back at where we came from. The higher we walked, the more impressive the views.

And suddenly there was a big lake, embraced by an enormous building, surrounded by mountain tops. Nuria. A former religious center, until times changed. In the 21st century it has turned into a tourist center with a hotel and an entertainment park in the back. A petting zoo where animals are kept within fences.

We don´t stay there long. We don´t belong there. Only long enough to watch a performance by two artists on the edge of the lake, our tired legs stretched out on the stony beach.

The road to the hostel is steeper than the mountain path we walked all day. It is ok, we persevere, because we know a warm meal and a soft matress are awaiting us. And an even more beautiful view than we experienced so far. 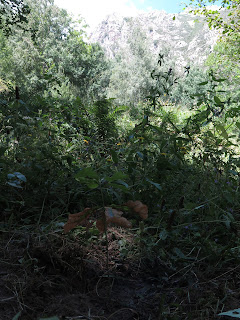