Day 18. An ending in the company of mountains. Montserrat

Everybody woke up early to see the sun rise over the Montserrat mountains. I woke up early as well but I had seen so many beautiful sunrises in the last 18 days already. There was a small voice in my head telling me I should get up, I shouldn’t miss this opportunity but I silenced it. I got up anyway and stood in front of the window. The sky was turning pink and I could imagine it must be outerwordly up there, surrounded by those oddly shaped peaks, watching the spectacle of the old world lighting up again, returning from the dark.

The square in front of the cathedral was empty. In a few hours it would be filled with tourists again. How did the monks deal with that? Living in a place that was chosen because of its remoteness and silence but had turned into a circus, a tourist attraction where the drinks are served in plastic glasses for double the price you pay in the villages at the foot of the mountains?

I sat at the square and watched the sky turn from pink to blue. I woke up the friend who had come to join me in my last steps. We ate miniature croissants and sausages and scrambled eggs and apple pie and drank orange juice and double espressos and it was lovely but it was odd as well. i remembered the other morning I woke up in the guesthouse of a monastery, then we drank instant coffee and nibbled on some biscuits while it was still dark outside, not even 7 yet.

At 9 the first busloads arrived, at 10 it was impossible to cross the square without almost tripping over people stopping to take selfies. We escaped into nature, it was still doable, when we walked back the crowds were moving up as well.

The final performance was planned at 12.30, a little further away at a spot where everywhere you looked there were spectacular views. Pep Aymerich and Jordi Esteban had placed a small sculpture that looked like a sibling of the one they had used in Núria on top of a small stone hill. The one at the beginning of our walk was white and made out of sugar. This one was made out of basalt and placed upon the same basin they had used before. A bamboo drain was attached to the small sculpture. We gathered around in a circle, holding the small bottle with white liquid we had received in Núria. We added to content to the big container with the same liquid, that once was a solid cone and got dissolved by pouring milk over it. We all said some words while pouring back the little bit of liquid we had carried for more than two weeks into where it had came from. The white liquid was poured in two bowls and two people at a time took a big spoon out of the bowl that was held by the person on their right, looked each other in the eye from opposite sides of the circle and poured it over the basalt sculpture. The bowls and spoons moved around, the liquid followed its path down the stone, into the container and through the bamboo drain into the Montserrat mountains. When there was nothing left Pep and Jordi purified the stone with fire, we all looked each other in the eye, smiling, somewhat emotional, saying thanks.

There was food afterwards and red wine. It didn’t feel as if it was the end of something, maybe because it wasn’t until we would walk down to follow our own path again. When the food was finished, when we cleaned our plates and packed our belongings, I planted the last oak tree at the place where we had shared food and wine for the last time. People were singing a song while I dug a small hole for the tree. A Catalan song they later told me was about planting a tree. We watered it, I gave everybody a seed ball made out of soil from Camallera and Cosmos Daydream seeds and when everybody left I spent a few last minutes just sitting there.

And then it was time to go home again. 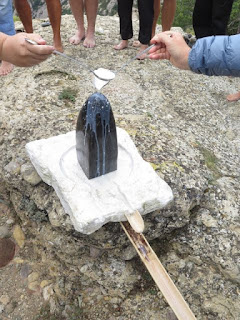 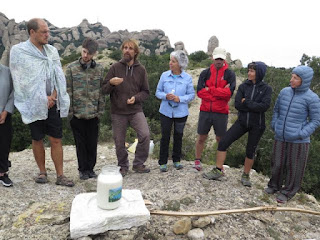 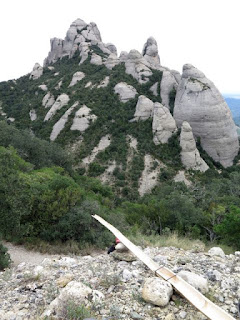