Day 17. Crafting a walk and getting smaller in the presence of a mountain. Manresa - Monestir de Montserrat 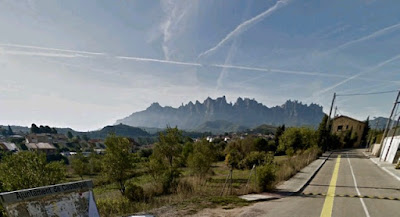 I’m walking slowly over the old bridge, the Pont Vell, ancient stones forming six big arches. Behind me the Cova de Sant Ignasi, where according to tradition Saint Ignatius of Loyola shut himself in a cave (“cova” in Catalan) for almost a year to pray and do penance when he stayed in Manresa after his pilgrimage to Montserrat (1522-23). He wrote the Spiritual Exercises there and the site has been visited by pilgrims throughout the centuries.

The cave is still there and I went to see it this morning early. But I didn’t see a cave. I saw a baroque church and a Jesuit convent in neo-Classical style. I saw signs pointing in the direction of the cave and before entering the “cave proper” I walked through a vestibule with four stained-glass windows in Venetian style, bronze relief works and some other “remarkable artistic elements”. Two bronze angels are over the door of the cave, inside there’s an alabaster altarpiece. I tried to imagine the original cave and how Saint Ignatius must have seen it but it was hard with all that splendour and tourists chatting in the place where silence reigned once. Some of the big rocks were still visible. I put my hand on them and closed my eyes. Darkness and cold.

The Pont Vell bridges the Cardener river. The movement of the water is accompanied on both sides by the movement of cars on the big roads and trains on the left bank. I am happy to be walking.

The fields start straight after the modern bridge crossing the railway tracks. Terraces and trees that have been planted in long straight lines. I pass the tower of Santa Caterina, on top of the hill, clearly a defense tower and now used as a big flag post. Graffiti again, connecting old and new times.

The castle of Oller del Mas has been there for more than a millenium, Saint Ignatius passed here as well but in the other direction and coming from Jeruzalem, he might have been more eager to reach his destination than I am. Or maybe not. It is addictive and soothing to be on the road, even when it is hard. For me, this is an easy walk, planned for me by somebody else and without the hardships of my former walks where I sometimes slept under bridges in the rain or in old ruins surrounded by big black beetles or on mountain tops beings disturbed by wild boar in the night. Somehow there is a similar feeling though, being on your way for days, being inbetween, a state you never reach on a long circular walk or a daytrip walk. I can see my endpoint already, the mountains of Montserrat are dominating the view now, but I am not there yet.

The family living and working at Oller del Mas has been there for 37 generations. I didn’t have the intention to visit the place but I am curious and walking around the building I bump into Frank, the owner who is in the middle of his work. He asks me if I am there to taste wine and it is tempting, after having thought about the blood of christ earlier that day but there is still a long walk ahead and the mountains are pulling at me. I ask him if it is true that they are tasting the soil and he smiles and confirms and we talk about the love of earth and the art of winemaking. He tells me there is something I might like to see and he hands me over to Jordi who takes me inside the building where I stand in awe in front of man-size amphoras containing wine. He tells me about the master craftman who makes them, Carles Llarch, an artist who calls himself a “currante” and works in the space where art and craftmanship meet. A man who embraces slowness and cares about what he makes and how he makes it. I would love to meet him. And as always when I see beautiful basic functional pieces of furniture, earthenware, knives, I want to learn the craft. Make something useful.

But I am already. Even when you can’t see it. Or can't use it in the way you use cups and knives and tables.

Time to go. And craft a walk.

Fields and farmhouses. Hills and valleys. The pale green of the crops and the different shades of the trees. The earth is a light red. Stone quarreys, scars in the beautiful landscape. Naked grey walls rising up to my left, all vegetation gone but not for long, back into woods, walking a winding road on a mountainside, a big road down below, the C-55. Castellgali, a quite charming medium-sized town, I walk on the Cami de Montserrat but there is no way to get lost, the mountains show the way anyway.

I walk through Can Prat. The mountains are getting closer and closer, rising up from the earth as out of nowhere. It is hypnoticing to walk with them in sight. With every step they get bigger. And I get smaller.

Santa Cecilia Montserrat must have been located perfectly before the road was there. It is still in a wonderful spot though, a bit lower than the road, overlooking a wide open landscape, the Montserrat mountain peaks in its back. The Irish artist Sean Scully fell in love with this place, love at first sight, and he was invited by the director of the Montserrat Museum to transform it into a space where the spiritual and the down to earth meet. Scully describes himself as a mixture between Rothko and Picasso. There is so much to say about him and his work and I will. More later. In the meantime here’s a video about the Espai d'Art Sean Scully - Santa Cecília de Montserrat: http://www.santaceciliamontserrat.com/es/intervencion-sean-scully.

The last 1,5 hour to the Montserrat Monastery. I have seriously shrunken. I am somewhere inbetween the foot and the top of the mountains, balancing somehow, even with the road being two car lanes wide. A smaller path diverts from the big road at some point. The monastery remains out of sight. I know it is around the corner. I know what it looks like. Or at least that’s what I’m thinking. But when I walk the last bend in the road and enter the narrow valley inbetween the two parts of the mountain range I can’t believe my eyes.